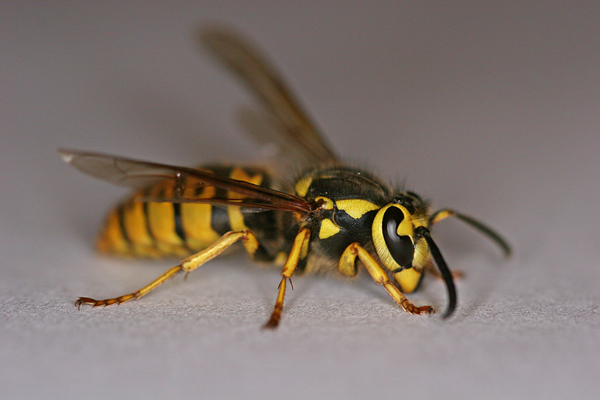 When you discover a wasp or hornet nest at your residence or commercial office building, don’t try getting rid of it yourself—call the professionals at Ehlers Pest Management to remove the problem for you. Our team of pest control experts know the best method of getting rid of any type of stinging insect infesting your property quickly and efficiently.

The types of stinging insects Ehlers can remove for you include: 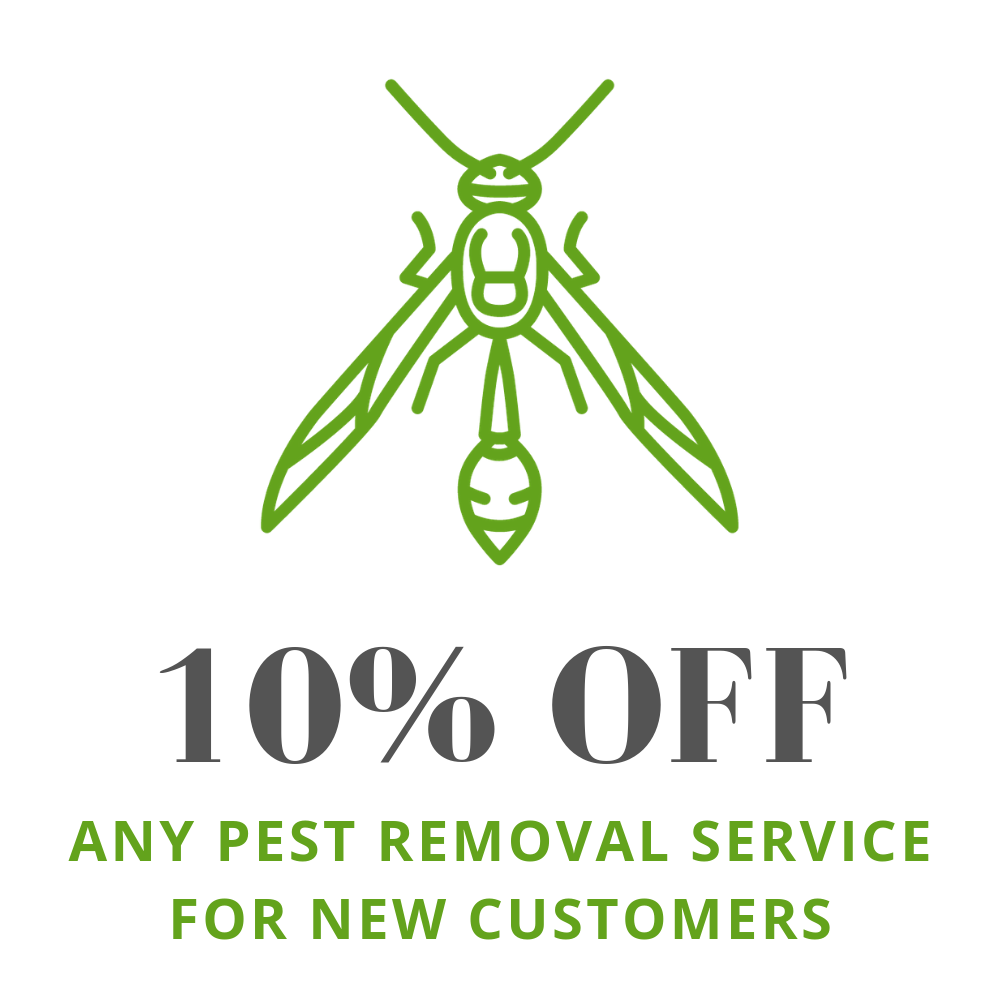 Milwaukee Trusts the Wasp and Hornet Exterminators at Ehlers

Our pest control specialists eliminate harmful stinging insects from your property with the most innovative techniques and products for effective hornet removal, wasp removal, bee removal and yellow jacket removal. Our safe approach to pest control services allows us to get rid of those pesky stinging insects while still keeping the environment safe for your children and pets.

Our Milwaukee pest control professionals are highly trained in treating and removing all stinging insects who call southeast Wisconsin home. Don’t wait – call Ehlers Pest Management today to schedule an appointment with us.

Signs You May Have a Wasp Nest on Your Property

Call Ehlers Pest Management today to get the help you need to get rid of your wasp nest in a safe and environmentally-friendly way.

The bald-faced hornet is bluish-black with easily distinguished white spots on its face, thorax and abdomen. They are usually about 1 inch long. They are most commonly found in the southeastern United States.

Bald-faced hornets construct hanging paper nests on tree branches and shrubs, usually 10 to 12 feet above ground. While generally avoiding nesting on sides of buildings like yellow jackets, bald-faced hornets will occasionally build nests on the sides of homes. Their nests grow larger with time, taking on a football-like shape. These colonies can contain as many as 700 workers.

Like all hornets, bald-faced hornets are extremely protective of their nest, aggressively stinging any human or animal intruder who poses a threat. With hundreds of hornets inside a typical nest, hiring a certified insect control expert from Ehlers Pest Management is your safest move for effective bald-faced hornet control in Mequon, Fox Point, Bayside and other neighborhoods throughout the Milwaukee area.

The bumblebee is black with yellow stripes on the thorax and abdomen, growing up to 1 inch long. Bumblebees live in colonies, preferring to nest in vacant rodent burrows, under porches and cement stoops, though occasionally nesting above ground in walls, firewood, and sheds. The colony grows larger throughout the summer until detectable. Bumblebees are considered a health concern due to the way they’ll aggressively defend their nest if provoked. Commercial sprays and protective clothing are available for bumblebee control, but the safest method is hiring Milwaukee insect control experts.

The carpenter bee is black with yellow markings and a robust 1 inch long shape. Outdoors, carpenter bees make nests in logs, dead tree limbs, decks, fences, and window sills. Though carpenter bees will nest in painted wood, they prefer bare wood. They are named after their tendency for chewing perfect holes in bare wood to make a nest for their young. Male carpenter bees guard the nest viciously, using his aggressive buzzing to threaten intruders to compensate for lack of a stinger.

Honeybees are golden-yellow with dark brown bands around a ½ inch long body. They are identifiable by the waxy honeycombs they produce. Honeybees’ nests are often found inside tree and rock cavities and caves, or in chimneys, attics, or crawl spaces. Honeybees are social insect establishing colonies featuring hundreds of honeybees. The swarms can be found amassed on buildings, fence posts, and tree branches. Though the large swarms are frightening, honeybees are docile and passive unless disturbed or threatened.

Though often mistaken for bees, yellow jackets are actually small wasps with black and yellow stripes, measuring between ½ to 1 inches long. In contrast to bees, they have a thin waist. They are easily agitated if their nests are disturbed and will sting intruders repeatedly in defense of their colony.

There are two types of yellow jackets found in Wisconsin. The Eastern Yellow Jacket, often found in the Midwest, makes nests in the ground and will often use rodent burrows and animal holes. Occasionally, they will nest inside the wall of a building. The German Yellow Jacket (Vespula germanica) is by far the most prevalent species in southeast Wisconsin. This species usually nests in attics, crawlspaces and the cracks and crevices of a building’s exterior, but will also nest underground. Both above ground and below ground, wasp nests are made of paper formed from wood fibers and their saliva.

Yellow jackets are highly social insects living with thousands of others in colonies. In the case of the German Yellow Jacket, a colony started by a single queen in the spring can have as many as 3,000 workers by fall. Due to the inherent dangers of the usual attempts to knock down a yellow jacket nest with a broom handle, it’s a good idea to have a professional Milwaukee pest control company like Ehlers Pest Management handle the elimination of a large nest.

A common reaction upon seeing yellow jackets is to want to kill them all as quickly as possible. However yellow jackets (and wasps) play an important role in controlling insects which damage crops and garden plants, so unless the nest is in an area where the yellow jackets pose an immediate threat to you and your family (or business), you may consider just leaving them be. The colony will only be inhabited for one summer, since the queens fly away to start other colonies. The remaining yellow jackets die come late fall, and the nest is rarely reused.

Locating an underground Yellow Jacket nest is more difficult, as there are usually multiple entry points. Also, these nests can be enormous, and any attempt to eradicate the nest will be met with an extremely aggressive response from its inhabitants. As with hanging nests, any extermination attempts should be done at night when the insects don’t see as well and when they are all in the nest. Due to the size these nests can reach and the fact that something as innocent as children or pets walking across the yard can disturb the Yellow Jackets and send them into a frenzied, stinging defense of their nest, we recommend professional extermination for this type of infestation.

Another difficult Yellow Jacket problem is when they nest inside an attic, a chimney, or, worse yet, inside the wall of a home. Because the insects in a nest inside a wall actually think they are in the ground, they will try to enlarge the next by chewing at the drywall. Eventually, they will break through the wall. So, if you hear scratching or buzzing sounds from inside a wall at your house, call us before all hell breaks loose! Our professional Milwaukee exterminators will assess the situation and determine the most effective, least toxic and least destructive method for eliminating the infestation. It may involve using a vacuum trap, opening the wall to remove the nest, or spraying inside the wall with a non-toxic pyrethrum aerosol made from chrysanthemum flowers.

Wasps have many species, ranging in color from reddish-brown to dark red and orange. Some wasp species have bright red and yellow stripes. Depending on species, wasp range in size from ½ an inch to 1.5 inches long. Wasps prefer to nest beneath soffits and decks, in the corners of windows, and under awnings and porches. Wasps like to nest in sheltered areas like hose reels, electrical boxes, attics, crawl spaces, and gas grills. Wasps are carnivorous predators feeding on spiders, caterpillars, and other insects.

If you’ve ever seen dozens of black and yellow wasps coming out of small holes dug around your flower bed or other area of bare ground, it’s understandable if you thought you had a yellow jacket colony. Chances are, though, they were just cicada killer wasps.

On closer look, you’ll see that although these wasps have yellow and black markings they are quite different from the markings on a yellow jacket. Although the sheer size of cicada killer wasps can be intimidating —up to 1 ½” long— they are actually a non-aggressive species. The males can’t sting and the females are only prone to stinging if handled. Chances are you don't plan on catching any of these wasps with your bare hands and playing with them, right?

paralyze by stinging. These unfortunate cicadas have an egg deposited on them and become food for the cicada killer wasp larva when it hatches. If you watch their comings and goings, you will see them fly toward their burrows carrying what looks to be dead cicadas. This should confirm that what you have are cicada killers, not yellow jackets.

While a large underground nest of yellow jackets would be something to be contact an exterminator about, we generally recommend leaving cicada killers alone. If you are uncomfortable with these large wasps flying around your yard, however, there are insecticides which can be put down their burrows. You can also give them a hint they’re not welcome by spreading a thick layer of mulch or putting down landscaping fabric over their burrows.

As the name suggests, mud daubers are wasps that build (or use) nests made of mud. There are three types of mud daubers in our region: the black and yellow mud dauber, the organ-pipe mud dauber and the blue mud dauber.

Although all mud daubers look quite menacing, none of them are aggressive and it is highly unlikely you’ll be stung by them unless you go out of your way to provoke them. So, unless they are nesting in an extremely inconvenient location—like, right by your front doorbell button—it isn’t advisable to exterminate them. Besides posing no real harm to humans, they are actually quite helpful in keeping the spider population in check.

Black and yellow mud daubers are 1” to 1 ¼” long with a very thin and elongated waist. They are black or brown with yellow markings and partly yellow legs. They build fist-sized nests comprised of tube-shaped cells covered by mud. These nests resemble a clump of mud more than they resemble tubes.

Organ-pipe mud daubers are ½” to ¾” long, with an elongated shape and a shiny black coloration. They build nests with mud in tube-shaped, parallel rows, usually on wall, bridges and overhangs.

Blue mud daubers are ½” to ¾” long with a metallic blue/black or green hued body, blue wings and the distinctive elongated, spindly waist of the daubers. Unlike the other two daubers above, the blue mud dauber doesn’t build its own nest. Instead, it takes over the abandoned nests of the black and yellow mud dauber.

For more identification tips, check out our pest identifcation guide.